The first point of the Genealogical Proof Standard is that  "reasonably exhaustive research has been conducted." When I am finally able to say that I am done with research on the Cookson family I feel sure that no one will fault me on this point! My most recent search was in a rather unusual source. I found it on the website of the Cary Library of Houlton, Maine. Houlton is the county seat of Aroostook County, Maine and it is very close to Linneus, Maine where our Cooksons were located from about 1835 to 1860. I had viewed this website a few years ago and found very little on our family. But I decided to revisit it.

One thing that was now on the website was the "Shepard Cary Accounting Ledger from 1838-1843". Shepard Cary had a general store in Houlton just down the hill from the Hancock Barracks where the Aroostook War soldiers were stationed. Calvin Gray Cookson joined the Army to fight in the Aroostook War at Houlton in April 1839. So the dates seemed relevant. Daniel Cookson, David Ellenwood Corless and John Dow are all in the 1840 Census as living in or near Linneus as well. So I thought that some of our family might be listed in the ledger. I read it page by page, 944 pages. Easier than that sounds as the name of the customer is at the top of each page. And I found them all. There was David Ellenwood Corliss in 1839 buying tea, boots, butter and peanuts and Daniel Cookson in 1839 buying 6 bushels of buckwheat, 2 quarts of Gin, fish, sugar, tobacco, a pot and a jack knife. Of more interest was "Serg(eant) Cookson" ,who I believe is Calvin, buying eggs, bread, tobacco and a cigar in 1841 and sugar and tea in 1842.

The most interesting entry, though, is for John Dow. In Dec 1838 he bought two pairs of ladies shoes and a third in Jan 1839 (he had a wife, a daughter in her early 20's and two teen age daughters in 1838/9). But on March 6, 1839, he bought "3 yd bobnett lace". In May he bought 8 yd cotton and 1 skein of silk. So my thought is, could he have bought the lace for his daughter, Mary Ann's, wedding dress for her marriage to Calvin Gray Cookson? If Calvin entered the Army on 15 April 1839 might they have gotten married in March or earlier in April? My parents married in Jan 1943 because my father had joined the Army and was about to leave for Basic Training. I think this is a common experience. I have not yet found any record of their marriage but this may be slim evidence to pinpoint it. 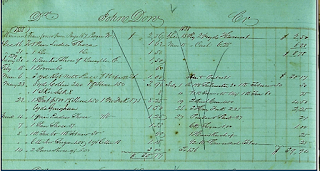 Just speculation, I know, but it also got me to wondering what brides in 1839 wore to their wedding. Amazingly enough I found quite a few pictures of wedding dresses from the period. I thought I'd share some of them which at least suggest that lace was in use on wedding dresses in 1839! 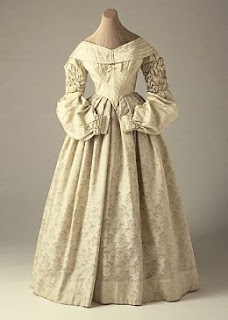 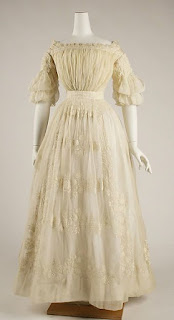 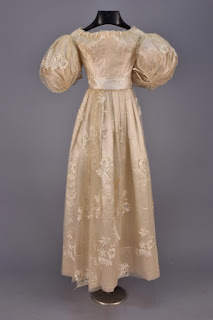 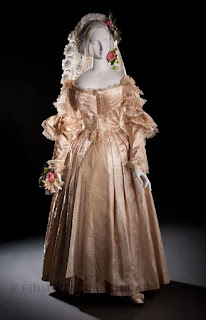 Posted by Unknown at 7:51 PM No comments:

In my pursuit of Daniel Noyes Cookson I have made some discoveries recently so I thought I would report on them here.

Margaret Cookson Freeman died in 1776, her daughter, Margaret Freeman Cookson (stay with me here!) had died before her in 1772. She leaves her son-in-law, John Cookson,  "the Income use and Improvement" of her farm in Watertown and all the farm equipment and stock but not her wearing apparel or her gold and silver and only half of the furniture. She also leaves him farmland in Waltham. But after John's death she says that this is all to go to her brother, John Cookson (the same John Cookson mentioned by Cutter as a possible father for Daniel.) She leaves the rest of her estate to her brother, John, a nephew, and a niece, a woman in Boston and a donation to the Church. She specifically states that everything left to John is to him and his heirs. Reading this it doesn't sound like she has any grandchildren as she leaves her son-in-law the farm only for his life but in the case of her brother, she specifically mentions his heirs.The other possibility is that any grandchild had so alienated her that she didn't even acknowledge their existence in her will.  My conclusion is that John and Margaret had no children. 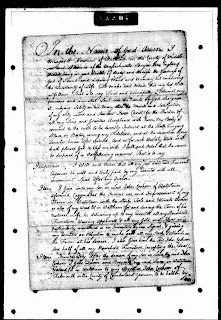 John Cookson, son of John Cookson, is recorded as living in Pearsontown (later Standish), Cumberland County in what is now Maine. This increases the likelihood that he is Daniel's father. In the data I have of him only three children are listed. Given the size of families at the time this is likely incomplete. Also I found mention of a second marriage so there may be children from that marriage as well. This will need to be researched.

Meanwhile, I decided to try to find the original marriage record for Daniel Noyes and Lucy Gifford. I had found this marriage in an index with the Maine Historical Society and more recently at Family Search. It is dated 1801 and was at Whitefield, Maine. It is intriguing because our Daniel did marry a Lucy Gifford. This record omits his last name. Also the date seems too early as their first (known) child was born in 1811. I thought perhaps the transcriber had switched the numbers on the date and not seen the last name due to an ink blot or some such. I found that the town records for Whitefield could be viewed on Family Search. I did that and found the marriage record. Unfortunately it is quite clearly written, no "Cookson" in sight and the date is in line with the other dates around it. It did give me the place they were living which is "Sheepscot Great Pond", a place that is now Palermo, Maine. This is on the Eastern edge of Waldo County and near Unity, Belmont and the other towns where some connection has been found to Daniel and family. There are two Daniel Noyeses who lived in the area in the early 1800s but neither had a wife named Lucy.

Family Search doesn't have early records for Palermo but there is a book written about the town that is online in its entirety at Archives.com. (A History of the Early Settlement of Palermo, Maine  by Allen Goodwin.) I read it and while he lists many of the early settlers no one by the name of Cookson, Noyes or Gifford is included.  At one point (page 18) he does say, "The first settlers of this Great Pond settlement took up their lands without purchase or leave of the proprietors and held the same by possession." This is very similar to Belmont. I am getting the idea that Daniel had a pattern of going to a wilderness area and settling without purchasing land and leaving when it became more organized and someone required payment. Another interesting point in the book on the same page is that Robert H. Gardiner was a large owner of land there and one of the proprietors. Daniel named his second son Gardiner. Anyway, this could account for the difficulty I am having in finding any deeds for Daniel.

A couple of other interesting tidbits have come up. On Genealogy Bank I found a mention in a newspaper of Gardiner Cookson as a bankrupt living in Linneus.  This is the first and only mention I've found of Gardiner being in Linneus. It is from 1842 which is the time the four children all seem to have been in Linneus. On Family Search I found that I could search the Court records for Aroostook County. In the Index I found Daniel Cookson(referring to the son, I believe) as a Plaintiff with Lucy Corliss TR as the defendant.  I googled "TR" as a court term and found it means trust. So I believe he was suing her trust or probate attorney.  Unfortunately when I looked it up it said that neither the plaintiff or the defendant had shown up! So I guess they settled it out of court. It should mean that there are probate papers somewhere but I haven't found them yet. It also tells us that she died before September 1858,

Thus we see quite a bit of time and effort has produced only small results but we do have more clues than we did. I still need to read the Linneus Town papers which I have to order from Salt Lake City. You never know what I may find there or what may show up somewhere else entirely!
Posted by Unknown at 4:47 PM 3 comments: