For Love of a Car

In a recent post in "Vita Brevis" from the New England Historical and Genealogical Society, Scott C. Steward wrote about the cars, horses and other forms of transportation (an Ostrich!) in his family photos.  This got me to thinking that there are many vehicles in my family photos and I thought it would be fun to share them.

The earliest is my 2nd Great Grandfather, Frank Stefani, with his laundry delivery wagon in Issaquah, Washington, around 1913. He eventually did own a car. His daughter-in-law, Peechie Stefani, told me the story that not long after he acquired it, he was driving downhill and wanted 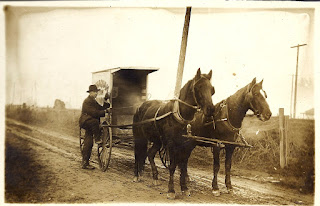 to slow down and started yelling, "Whoa! Whoa!", forgetting about the brake!

Thirty-three years later, in about 1946, his son, Clement, posed with a freshly killed buck on the hood of his car! Clement's son, Johnny, age 6, posed with him. A proud moment! The back of the photo says that "he had three pound on each horn", perhaps prong was meant, at any rate, a big buck! 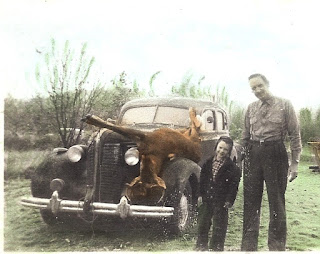 In my father's family photo collection there are several photos of cars. The earliest is obviously in the Twenties, I'm guessing about 1928. It shows my grandparents, Walter and Bessie and their children, Wally, Betty and Jack, on the right side of the photo. I'm not entirely sure who the three women on the left are but I'm guessing that they are Bessie's three sisters, Edna, Mabel and Alma 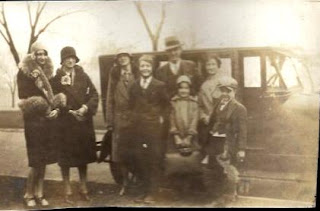 Hudson.  Another photo around the same time seems to show the same car. 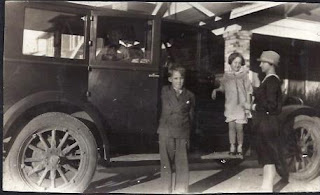 A decade or more later, Jack posed with a then more up to date car. His first car, perhaps? 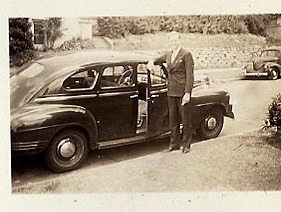 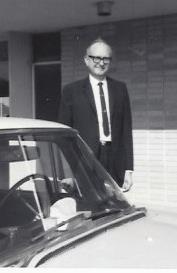 Even my mother posed for a photo by the car with her daughters around 1955. As I 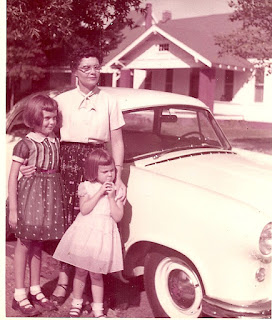 recall the car was a Nash Rambler. Her second husband, Mac McDonald loved cars and here he is with his car around 1943. 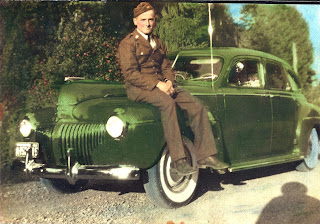 Not to be outdone, the Negley family has an impressive photo of Dennis' grandfather, James C. Negley, MD, in front of his auto in McMinnville, Oregon in 1949. 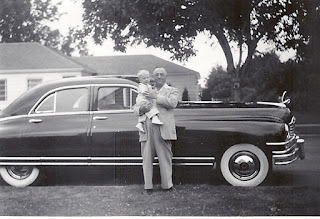 And Dennis and his brother, Pat, on top of the family car in McMinnville, also in 1949. 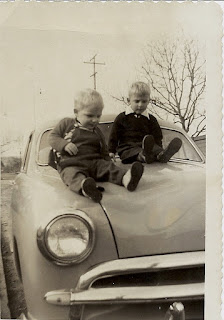 Here are the brothers almost 40 years later in front of our truck in Modesto about 1982. 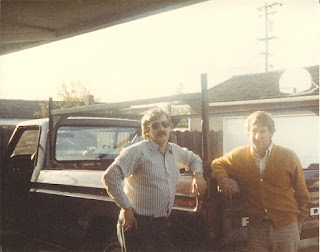 Finally, a fitting end, a photo to challenge Mr. Steward's photo of the girls riding an ostrich, here is Dennis' mother, Eloise Negley, riding a camel on her trip to Egypt in July 1977. 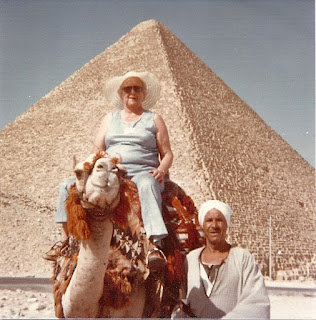 Cars and family are intertwined and you can trace the history of one through the other.
Posted by Wendy Negley at 12:36 PM 1 comment:

When I was eleven, my Mama, sister and I moved back to my Mama's childhood home in Seattle.  It was a big Craftsman style house on Cherry Street in the Madrona District. It was summer and hot for Seattle when one day Mama and Grandma took us  down to the basement.  It wasn't a finished basement but a big cement room with windows, a washer and dryer and storage. I remember that it was nice and cool and not at all scary. Mama got out a big barrel, about 4 feet tall and 2 feet in circumference. It was made of thick brown paper with metal bottom and top.  She opened it up and started pulling out objects wrapped in paper. As she unwrapped them each one was beautiful. I was excited to see what was next. She explained that these were her wedding presents which she had wrapped and put away many years ago after her wedding to be sent for later when she and my Dad were settled.

My parents, Margaret Edith Kells and John Marshall Peterson, were married in Seattle on 30 Jan 1943.  The U.S. had just entered the War in December.  My Dad had joined the Army and was married in his uniform.  I think they were already planning to marry and just sped up the ceremony's date so that they could be married before he left.  Margaret followed him to his training at Harvard (Officers training for the Quartermasters' Corps), Stanford (more of same), a supply truck company in training in Augusta, Georgia and one in Mississippi. Finally Jack left for overseas in December 1944. After the war, they lived in Boston where Jack completed his MBA at Harvard, then moved to Chicago where he went to the University of Chicago for a Ph.D program in Economics. I was born there in 1948. In 1951, they moved to Washington, D.C. where Rhonda was born. In 1953, furthering his career, Jack moved the family to Alcoa, Tennessee. Then in 1955 the family moved to Little Rock, Arkansas.  Here they were more settled and did some looking for a house but never bought one. In 1959, Jack fell in love with his personal secretary and, for that reason and many other longer term ones, he and Margaret got divorced. Thus the move back home to Seattle.  And thus the fact that the wedding presents still sat in my Grandmother's basement, 17 years later.

As my mother unwrapped the items she told us the stories of who had given them to her and so on. Of course, I don't recall most of them.  I remember the beautiful blue glass pitcher which was a gift from my Dad's favorite history professor at the University of Washington. And the dishes. She had a full eight place setting set of hand made china with several serving dishes.  They were very beautiful, blue flowers on white with gold trim. These were made by a woman she knew named Mrs. Lilly (this is the only name I ever heard her called.) She made china for a living and was well known to the family and in Seattle generally. My mother's family and friends had contributed to the china and each plate or bowl is inscribed on the bottom with well wishes and the names of the people who gave it.  There also was a lovely vase in a different pattern but also by Mrs. Lilly and inscribed on the bottom.
It was bittersweet for my mother to unwrap these presents, given with good wishes for a marriage which had died. And she never had gotten to use them! So, we moved them into the house we moved into and used them over the years at every dinner party, Thanksgiving, Christmas and other holiday dinner. We used them, admired them and enjoyed them.

Years later in the 1980's, Mama decided to give my sister and I her good china. She wanted to do it now while she could enjoy our enjoyment of it, not wait until she was dead to distribute it.  So Rhonda and I chose pieces and we split the china, each taking a four place setting and splitting the serving pieces. And I have used it for family dinners at Thanksgiving, Christmas, Easter and so on. And my daughter plans on using it when it is her turn to receive it. So, I would tell Mama that her china, her pitcher and her vase have been used and enjoyed by a loving family (which is a product of her marriage) 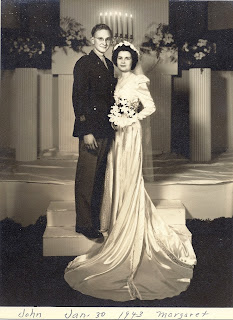 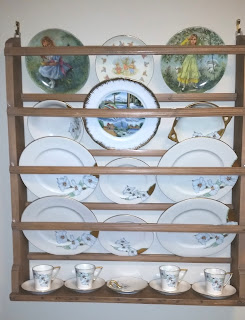 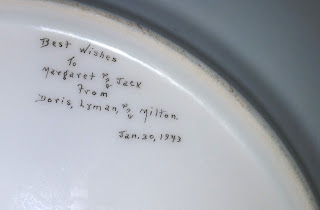 Inscription on back of a dinner plate 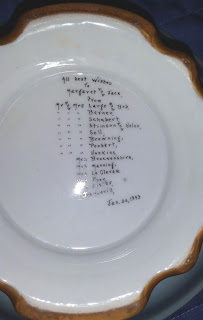 Inscription on back of a serving dish 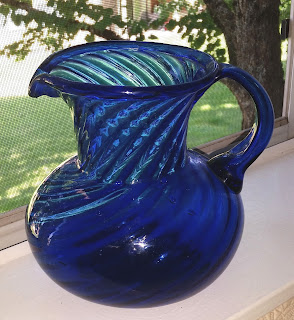 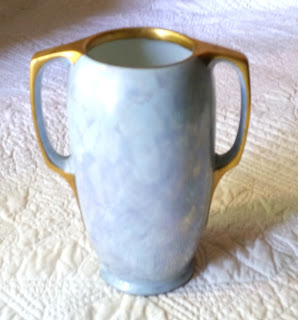