One of the regrets I have is that I didn't buy my grandmother's purse when she decided to sell it. It's been about 47 years now but I did finally do something about it. I bought a similar one on eBay (of course!)

When I was a pre-teen in the early 60's, my grandmother lived with us. I should say that we lived with her as she owned the house! She had a bed-sitting room which was labeled off limits except by invitation. In it she had a dressing table with many things I admired: her jewelry, her Czechoslovakian glass perfume bottle and such. Occasionally she would let my sister and I see her jewelry. One day I was home alone and found myself in her room (no idea how that happened...) I looked through one of the drawers in the dressing table. There I found the most beautiful little purse I had ever seen.  It was thin with a short chain, made of linked metal pieces and decorated with a lovely design.  I no longer remember it looked like exactly except I think it had a white background and perhaps roses in the design. I fell in love with it. I wanted to know the story of it but now I had a problem.  In order to find more about it I would have to confess that I had trespassed in her room. My grandmother was a rather strict and forbidding woman.

My solution was to wheedle her into showing us her jewelry again.  Then while we were in front of the dressing table I asked if there was anything nice in that drawer. She caught on to me and I had to confess what I had done. She showed us the purse but didn't say too much about it. I never saw it again.

Less than ten years later my grandmother decided to start giving things away to her grandchildren rather than wait until she was dead. My mother told me this. I told her that what I wanted was that little purse. But my mother said that my grandmother was going to sell it and already had it on consignment in a local shop. But, she said, I could buy it. She wanted $25 for it.  It was 1969, I was just out of college and not making much money. So I decided I couldn't afford it. Those were the days before credit cards! It occurs to me now that I could have worked out a payment plan with her. But that didn't occur to me or my mother or her.

Another ten years or so after that, my mother, having been inspired by Alex Haley's Roots, decided to interview her mother about her life and tape record it. When I heard the recording it included the story of the purse! It seems that as a young girl just out of High School she had purchased it with some of the first money she made as a Secretary. She took the ferry to Seattle every week to work and that is where she met my grandfather. One day after getting off the ferry she dropped the purse.  He picked it up and gave it to her and offered to walk her home. That's how they met. He then walked her home from the ferry every week. Eventually they married and were married for life. So now I understood why she was angry at me for sneaking a look at the purse.

As time went on I became familiar with antique purses, Whiting and Davis and so on. I would always think of the one she had. I would sometimes see one that reminded me of hers but it would be too expensive still (much more that $25 now!) Recently I was again reminded of The Purse. I thought it was stupid of me to regret it and I should buy a similar one. So I went to eBay, found one and bought it. It reminds me a bit of what I recall of hers and it is quite beautiful. I look at it and think of her as a young woman and of me as a young girl. I feel a bond of an appreciation for a lovely object.

And that's the story of my grandmother's purse!

P.S. She did give me the Czechoslovakian glass Perfume Bottle! 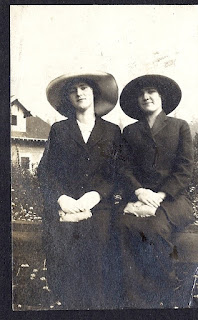 My grandmother on left, about 1915, that might be the purse on her lap 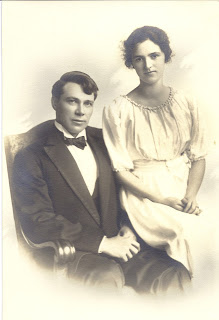 My grandmother and grandfather wedding photo 1916 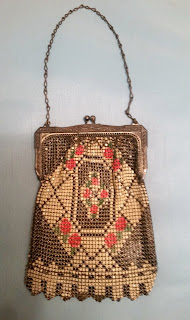 Purse I bought similar to my grandmother's 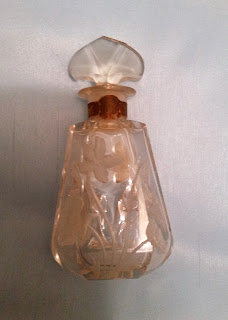