My Grandparents and I, Part II: My Paternal Grandmother

My father's mother was named Elizabeth Hudson at birth but was called Bessie. I never heard anyone call her by any other name than Bessie. She was always warm, kind and gentle with a sweet smile.  In fact, pretty much the way you want a grandmother to be!

She and my grandfather loved to visit family. They kept in touch with everyone as I saw when my father died and I inherited my grandfather's (and grandmother's) address book. They had siblings, children, grandchildren, great grandchildren, cousins, the families of their siblings' spouses and ex-spouses and on and on in the book! They regularly visited everyone all over the U.S. My grandmother was particularly close to her sisters, Alma and Mable, and I recall many visits with them. It gave me a real feeling of belonging to a family and having a wide circle of relatives.

When I was having some trouble with sleep and talking in my sleep as a child she said she  understood and told me two stories I have never forgotten about herself. It seems that she used to sleep walk as a child.  One night her parents woke up hearing a noise of someone walking around downstairs. Her Dad picked up his rifle and started down the stairs, swiftly followed by her mother saying, "Don't shoot, Ben! It might be Bessie!" This became a family catch phrase after that! (It WAS Bessie.) Another time they followed a similar sound only to find Bessie walking in her sleep on the top of the railing around the front porch. The house was built over a basement and on a hill so this was actually quite high up. They didn't want to startle her so they watched silently with their hearts pounding as she walked around the railing. Fortunately she didn't fall and when she got down they picked her up and took her back to bed.

Bessie was the youngest of four girls but she was the first to marry. When she came home from College with her young man in tow the family tried to convince her that she was too young to get married.  But she prevailed and they were married. And they were married the rest of her life. It was always apparent that they were devoted to each other, equally in both directions. My grandfather was a commanding figure and could dominate a conversation but when she quietly and calmly gave her opinion he always listened. He was raised a Lutheran and became a Presbyterian minister. I asked him once why he had become a Presbyterian, not a Lutheran, minister.  He said, "Because Bessie was a Presbyterian." That says a great deal about her position in his life.

As I have researched the family tree,  I have come to have even greater admiration for her. In about 1931, with the "Great Depression" in full sway, my grandfather decided to go to Seminary and become a Minister. In my mind most wives would go, "Are you out of your mind? We have three small children to feed and there's a depression on!" But instead, she went to work and supported him and the family while he went to Seminary. (She might have said that, too but her actions were completely supportive.) She had a College education when most women didn't and she used it to support her husband and family. Because her family came first.

In an entirely different area she always amazed me because when we went places she would know the names of all the trees and all the flowers. She loved flowers and we often went to visit gardens with her 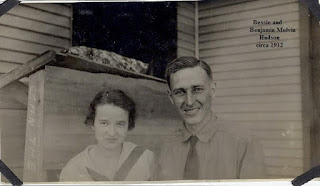 Bessie about 16 and her Dad 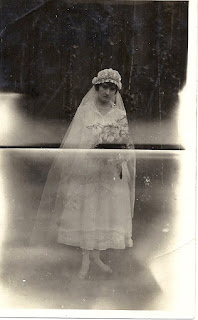 Bessie on her wedding day 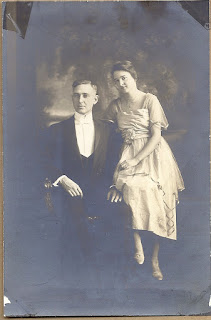 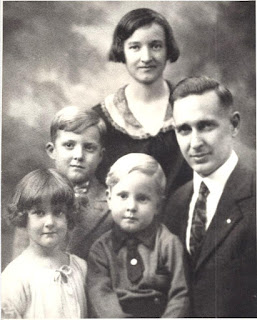 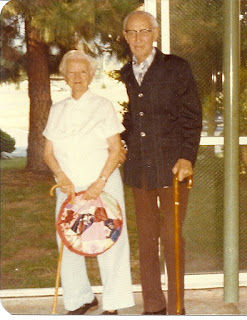 Bessie and Walter, 60th Anniversary, 1977
. I found a description of her wedding in the local newspaper and it described the Church as being abundantly decorated with smilax. I had to look that up, smilax, a small white flower. So I see her there surrounded with flowers. I will always think of her with her Walter and her flowers!
Posted by Wendy Negley at 9:12 PM 1 comment: