(I wrote seven Valentine's day Love Stories last year and thought I'd add some new ones this year because family history is really just a huge collection of love stories.)

On 26 Aug 1846, Giovanni Tinetti, age 21, married Domenica Catherina Zanotti-Cussio, age 18. They were married in the town of San Giovanni Canavese where he was living at the time. Giovanni and Domenica had seven children, two of whom were stillborn. Giovanni prospered and they moved to a big house in Valia, just outside of Torre Canavese, not far from San Giovanni. Unfortunately, Domenica died on 3 Apr 1863, seventeen years after the marriage. This left Giovanni with five children ages 17 to 4. He turned to his sister-in-law, Catterina Zanotti-Cussio, for help.

Catterina was thirty-three at this time. She came and took care of the children for Giovanni. In a short while he became concerned about her reputation, living in his house and not being married. So he offered to marry her, in name only, to protect her reputation. The family story goes that she replied that she would marry him but only as his wife in full and in fact. He was very happy with her reply and they were married. Together they had six children.

It's a sweet story but, of course, leaves some questions. She was unmarried at 33, had she secretly been in love with him for the entire time he and her sister were married? An oddity is that the only marriage record I could find for them is 14 Aug 1878, after all their children were born. I looked in Torre Canavese and Cuceglio (her parish) but it occurs that I didn't look in San Giovanni where Giovanni and Domenica were married. For a man who was so concerned about her reputation to wait 15 years to marry her seems unlikely. I don't know but it is an Italian love story nevertheless, si?

As a note, I have no pictures of her but I have pictures of two of her daughters at a fairly young age and one can assume that they resemble her. 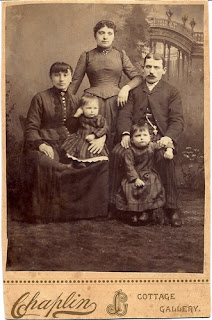 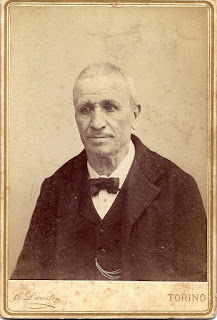 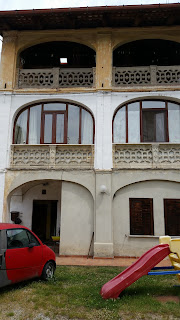 A Moonshiner in the Family! Wyatt Nolan Hunt

With Valentine's Day coming up I was thinking about my grandmother's sister, Mabel Jane Hudson. I have recently written about my grandmother, Bessie Hudson Peterson, and her great love and long marriage to my grandfather, Walter Peterson. Her sisters were not as lucky in love. Her oldest sister, Edna, fell in love with a young man who enlisted in World War I and never returned. Her third sister, Alma Agnes Hudson, married rather late in life to Edward Quinn. She was 36 when they married. They had one daughter, Evelyn, and were happy but, unfortunately, he died in 1942 at the age of 47. Alma never remarried. Mabel's story was a little different than her sisters.

Mabel also married late in life, she married in August 1929, age 37. The man she married, Wyatt Nolan Hunt, had been divorced for two years and had a ten year old son. They were married in Benton, Arkansas, although Wyatt was also from the Fort Worth, Texas area. Mabel and Wyatt were divorced in 1932. My father said it had to do with his drinking and that's all I know about it. I did find her living alone in the 1930 Census, although listed as married. I still haven't found him in that Census. Neither of them ever re-married until his death in 1961. Then she married his friend, a man with the last name of Owen. My father didn't know his first name. He either died rather soon after they married or they were divorced. To me this suggests that she loved Wyatt all her life and married his friend out of their mutual loss. We never talked about either husband. I do recall that she came to Tacoma, Washington, 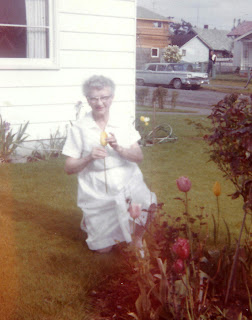 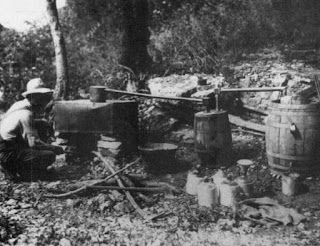 Moonshine Still 1930
to stay with her sister for a few months around 1961 or 62. My grandparents just said that she had had a loss or some such vague explanation. Probably was after Wyatt died.

Today, while I was thinking about this I decided to do some research to see if I could find out more about either husband. Using Genealogy Bank I looked for any newspaper articles about Wyatt Nolan Hunt. I only found one. It was surprising! The Dallas Morning News on Thursday, 15 Feb 1934, reported on some recent court cases. One line of this article reports that Wyatt "Nowlin" Hunt and two other men pleaded guilty to "revenue charges" involving "whiskey stills or distilled spirits." I think that means that he was making and/or selling moonshine! It fits with what my father said was the cause of divorce-his drinking. I tried to find some data on moonshining activity in Tarrant County or Dallas at that time. I found that in his book, Recollections of Farm Life(1965), Robert L. Hunt, Sr., recalled that "There was always some making of moonshine liquor in the area of Northeast Texas...[by 1919]The moonshiners had become common in the area. In fact so much moonshine was hauled out of the area that some places had quite a reputation for liquor making. Farms were left idle in some places and farmers turned to making liquor as a more profitable occupation." So the next time you watch The Dukes of Hazard reruns, think of Wyatt. 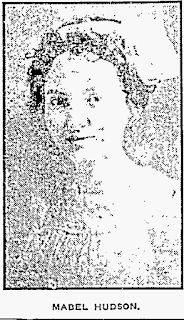 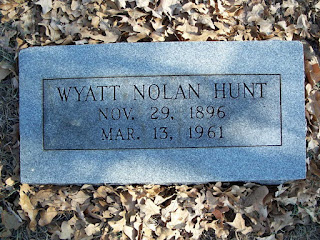