Edward was the older brother of my 2nd Great Grandmother, Elizabeth Buck. I mostly know of him through family letters that were in the possession of Jim Brown, some he sent e and some he sent me copies of.  Edward was born on 31 Aug 1841 in Manchester, England as shown on the Family Bible record.  He was the first born on John Buck and Sarah Lane, both of whom I have written blog posts on.  His father died 16 Dec 1846 when he was 4.  In 1850 his entire family (Mother, sister, Grandparents and Uncle and his family) moved to Buffalo, New York.  His Grandparents, William and Hannah Lane, his Uncle and his Mother are listed in the 1850 US Census but, for some reason, the grandchildren and his Uncle's wife are not.  I think the Census taker asked William Lane the names of his wife and children but didn't ask for any grandchildren or sons or daughters in law so William didn't volunteer them!

Edward's mother, Sarah Lane Buck, remarried on June 14, 1853, Thomas Kay, also from Manchester.  He had a son, Robert, and he and Sarah soon had three daughters.  So by 1857, Edward had a younger step-brother, a younger sister and three younger half-sisters.  By 1859 the family had moved to Bayham, Elgin, Ontario, Canada. Here Edward's half-brother, William, was born.  The 1861 Census of Canada shows Edward along with his grandparents, Thomas and Sarah Kay, and all the siblings. Edward and his sister, Elizabeth, are living in a 1 1/2 story frame house with their grandparents, William and Hannah Lane.  Thomas and Sarah Kay, his son and their four children are living next door in another 1 1/2 story frame house.  Edward is 20 years old and his profession is listed as Laborer. Uncle William Frederick Lane and his wife and children had been living in Canada as early as 1851 but by 1860 they had moved to Cleveland, Ohio.

About 1870 Thomas Kay and family moved to Saginaw, Michigan.  Thus the letters between Cleveland, Saginaw and Canada. In 1864, Edward joined the Vienna Volunteer Company of Infantry.  He was appointed First Corporal.  I don't believe he saw any fighting in it.  This company is interesting, though, as in 1866 it combined with four other nearby volunteer companies to form the 25th Elgin Battalion of Infantry.  This Battalion fought in WW I and in WWII, one company from it took part in D-Day, coming ashore in Normandy in 1944.  This is still a unit in the Canadian Forces, the 31 Combat Engineer Brigade, "The Elgins".  On August 19, 1865, William Frederick wrote to his father to say that Edward had gone to Chicago on his way to Cleveland and discovered an ad for Carpenters wanted.  This was for the Mobile and Ohio Railroad  which needed a bridge and tracks repaired after being destroyed in a Civil War Battle.  Edward went to Columbus, Kentucky to work for the RR.  He and his Uncle had been planning to find work together in the South following the devastation of the war.

Not long after this on 13 Nov 1865, William wrote to his sister that he had received a letter from Columbus telling of the death of Edward. He died of "congestive chills" on 28 Aug 1865 and was buried in Columbus.  Congestive Chills was an old term for Malaria.  It is tragic as he seems to have been a cheerful and bright young man. In another letter that Jim read me but, sadly, didn't send, Edward mentions that the people he knows in Canada don't know that he is "a gentleman".  I didn't know either and I am taking that as a clue to his Great Grandfather's parentage, still unknown.  Without the letters I wouldn't have known what had happened to him.  I am glad to have been able to tell Edward's story! 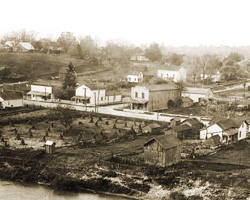 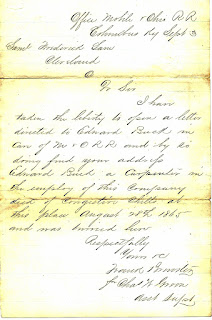 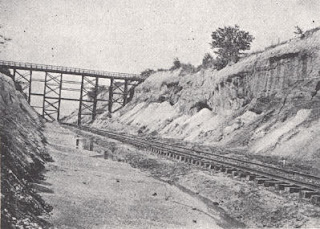 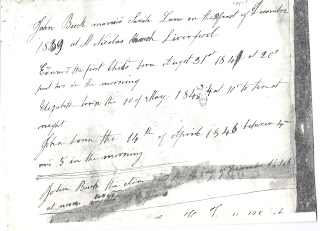 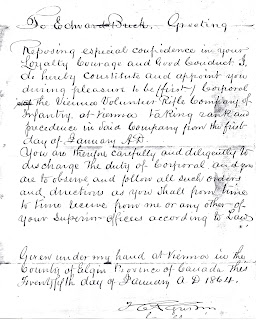 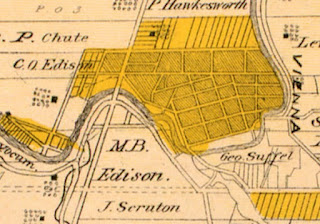