Jacquetta of Luxembourg is most well known for being the mother of Elizabeth Woodville, Queen of England as the wife of Edward IV.  This is a family history blog, not a history site and it is Halloween night, so I am just emphasizing the tales of witchcraft associated with her.  Jacquetta was born probably in 1416 to Count Pierre I of Luxembourg and St. Pol and Margueritte Debaux.  On her mother's side she was a descendant of the Plantagenet Kings of England, on her Father's she was of the Royal family of Bohemia a cousin of the holy Roman Emperor and a descendant of Duke John II of Brittany. The history of the House of Luxembourg started with a legend. This is that the first count, Siegfried, the water goddess, Melusina.  She caused the castle to appear on top of the rock it sat on.  They were happily married until Count Siegfried broke his vow of allowing her privacy once a month. He spied on her in the bath and discovered that she was actually part fish, a magical being like a mermaid.  Angrily, Melusina disappeared.  This legend was accepted as history by the family and I'm sure it would have influenced Jacquetta. 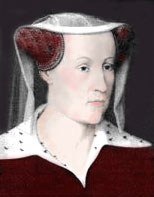 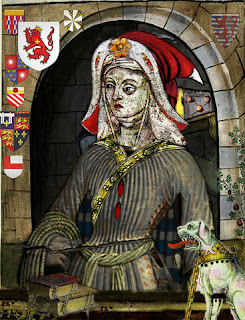 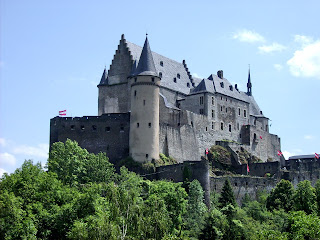 In 1432 a sixteen year old Jacquetta married John, Duke of Bedford, aged 43.  She became the first lady (in precedence) of France and second only to the King's mother in England. The Duke of Bedford had a fine library and employed alchemists so Jacquetta would've been exposed to these.The Duke had assigned a young knight named Richard Woodville to be Captain of Calais and he and Jacquetta would've known each other.  After the Duke died in September 1435, Richard was assigned to take Jacquetta home to England. They married secretly on the way. This was very shocking, she was the highest lady in the land next to the Queen Richard Woodville was a "mere" knight.  Also the King had told her that she couldn't marry without his permission.  He likely planned to wed her to a supporter of his own.  The King was very angry but ended up merely fining her and by the time their first daughter, Elizabeth, was born they were again in his good graces.  Richard was made 1st Earl Rivers in 1448.  Jacquetta was related to both the King and the Queen and was a favorite of the Queen.

Richard and his wife were on the Lancaster side in the War of the Roses.  When Edward IV of York won and became king Richard retired to his lands.  He and Jacquetta had fourteen children.  The first accusation of witchcraft is that Jacquetta used it to induce Edward to marry her daughter, Elizabeth.  However, by every description of her at the time she was a very beautiful woman so it seems unlikely that witchcraft would have been necessary.  Jacquetta used this family fortune to secure advantageous marriages for her children. She made an enemy of Richard Neville who turned against his former protege, Edward, and executed Jacquetta's husband and one of her sons.

Neville charged Jacquetta with witchcraft and had her brought to trial. Evidence was a lead figure of a knight broken in the middle and bound with wire which she was accused of making and it was said that she had made one of King Edward and another of her daughter Elizabeth.  These charges were dismissed by the king, her son in law. They were revived later by Richard III as a justification for declaring Elizabeth's marriage to Edward invalid and their children illegitimate thus allowing Richard to take the throne. It is unknown if there is any validity to these charges. What is clear is she was a woman of amazing intelligence and strength of will.  Who could marry for love and come out on top, navigate the politics of the English during such a tumultuous period and die a natural death in the bosom of her family still in the height of power.  Her descendants include Henry VIII and Elizabeth I and she is the ancestress of most of the royal houses of Europe to the present day.

Her story is told beautifully by Phillippa Gregory in The Lady of the Rivers and The White Queen.  She also wrote a history book called The Women of the Cousins' War which covers Jacquetta's life.  I was very thrilled to find her in our family tree!
Posted by Wendy Negley at 11:14 PM